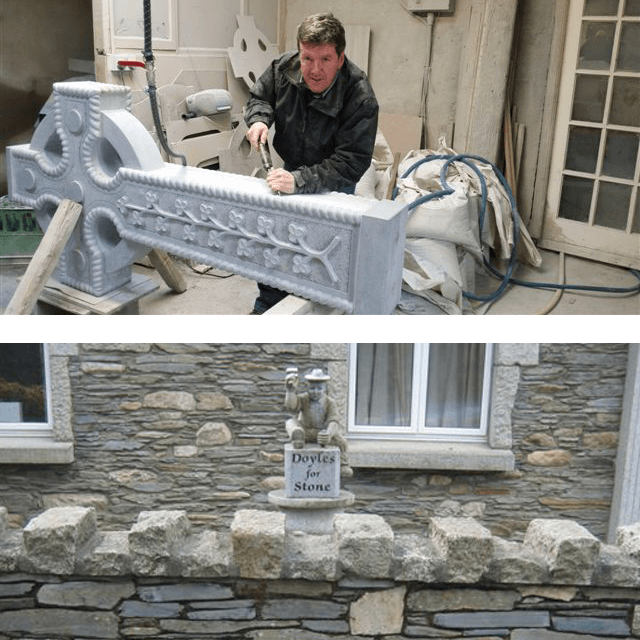 Established for over 150 years, we are specialists in Hand Carved Monuments and have inherited the skill of Hand-Cut Lettering and Sculpting.

Being 4th Generation we have vast experience in stone manufacturing. Out main aim is focused on creating quality pieces at an affordable price and offering top quality customer service.

Our Company can supply memorials to individual specifications in Granite, Marble and Limestone. We will provide a comprehensive service to achieve the desired result.

We produce headstones in a variety of styles, designs and colours to meet the needs of our customers. Be it an old traditional look, hand carved with hand cut letters or a more modern, contemporary style, our selection of designs and styles is sure to have something to suit all tastes. 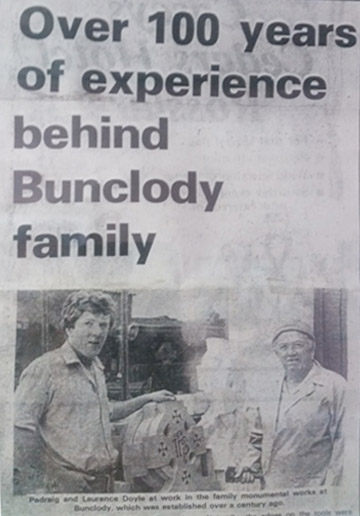 Stonecutting is one of lreland’s oldest and natural trades. Ruined monastic remains and saintly high crosses are made magnificent by the ornamentation and secular motifs permanently created from natural stone using a chisel and a breathtaking standard of craftsmanship. Stonecutters dress and shape the stone while stonecarvers, stonepolishers and labourers completed the work

Co. Wexford has a tradition of producing quality stoneworkers and one of the oldest families in the trade are the Doyles of Church Road, Bunclody. When Paraic Doyle joined his father Laurence Doyle, over forty years ago, in this long established business, he became the fourth generation to promote the trade. Like all crafts, the passing of time has brought about sweeping changes, and therefore todays stonecutters could best be described as monumental masons. The Doyles have faced up to the challenge of change, yet the individual style prevails, and the customer continues to receive a first class service.

The origins of the Bunclody business has a romantic air to it. Laurence and Patrick Doyle were brothers and stonecutters by trade who rambled from Coolkenno, Co. Wicklow, to Bunclody and married two sisters. In the 1870’s Patrick returned to set up business in Coolkenno while Laurence remained in Bunclody and established the business now owned by his great grandson Paraic Doyle.

This was the era of the journeyman stonecutter, but settling down and working from a permanent base gave obvious advantages. Back in the final quarter of the 19th century the role of the domestic stonecutter was physically demanding. For the most part it required working on churches or private residence preparing the stone on site. Laurence sweated his trade on the churches at Marshalstown and Oulart, and on the beautiful circular window in the Church of Ireland at Gorey, known as St. Catherine’ s wheel. In 1906 his work was done at the early age of 52.

His genius was passed on through his son Patrick Doyle. He learned the skills of stonecutting from his father during a strict seven year apprenticeship.Changes came about in the trade during his time as the demand for headstones and kerbings increased. Laurence Doyle son of Patrick’s had to be a stonecutter, his pedigree suggested that. His mother, formerly Miss Elizabeth Travers was the daughter of a Gorey stonecutter, Myles Travers. Laurence gained experience in Northern Ireland, working for a short time in the Ballymena district.

However he gained most experience from his father, he took over the business after serving his time in 1943. He expanded the business greatly even as far as Manchester where himself and his son erected a fine headstone. He died in 1992 aged 75 years. Paraic Doyle son of Laurence served his apprenticeship with his father and took over in early 80’s.

By virtue of popular demand he expanded the business even further supplying headstones, granite worktops, fireplaces and all stone requirments. The Doyles are keen and successful because they are the experts. The tradition runs deep in their veins, any family business that can sustain a service to the public for over 150 years in such a competitive trade must have a special quality. Paraic maintains a fine record of personal supervision, quality workmanship and attention to detail. Hard work and perseverance has brought him success and long may it continue.

We use cookies on our website to give you the most relevant experience by remembering your preferences and repeat visits. By clicking “Accept”, you consent to the use of ALL the cookies.
Cookie settingsACCEPT
Manage consent

This website uses cookies to improve your experience while you navigate through the website. Out of these, the cookies that are categorized as necessary are stored on your browser as they are essential for the working of basic functionalities of the website. We also use third-party cookies that help us analyze and understand how you use this website. These cookies will be stored in your browser only with your consent. You also have the option to opt-out of these cookies. But opting out of some of these cookies may affect your browsing experience.
Necessary Always Enabled
Necessary cookies are absolutely essential for the website to function properly. These cookies ensure basic functionalities and security features of the website, anonymously.
Functional
Functional cookies help to perform certain functionalities like sharing the content of the website on social media platforms, collect feedbacks, and other third-party features.
Performance
Performance cookies are used to understand and analyze the key performance indexes of the website which helps in delivering a better user experience for the visitors.
Analytics
Analytical cookies are used to understand how visitors interact with the website. These cookies help provide information on metrics the number of visitors, bounce rate, traffic source, etc.
Advertisement
Advertisement cookies are used to provide visitors with relevant ads and marketing campaigns. These cookies track visitors across websites and collect information to provide customized ads.
Others
Other uncategorized cookies are those that are being analyzed and have not been classified into a category as yet.
SAVE & ACCEPT